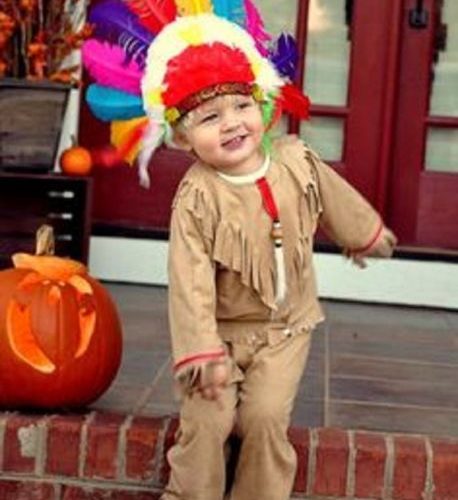 Celebrated on April 19, the Índio is part of Brazilian culture and is a great idea for children’s fantasies. The character is one of the most important in our colonization and cultural process, composing the first to populate Brazilian lands and also extremely important to our history. It also has the advantage of rendering a costume that is easy to be recognized and even easier to make! Whether for a boy or a girl, the children’s indian costume it’s a good idea for carnival, Halloween or themed events. 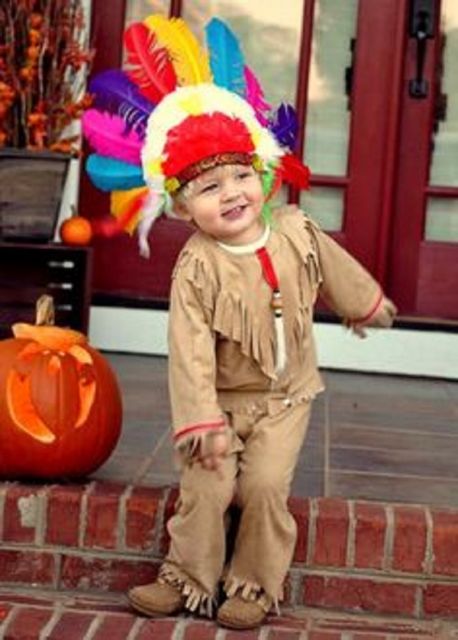 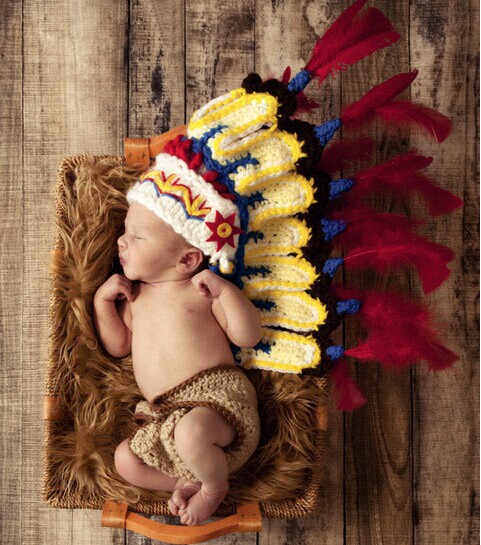 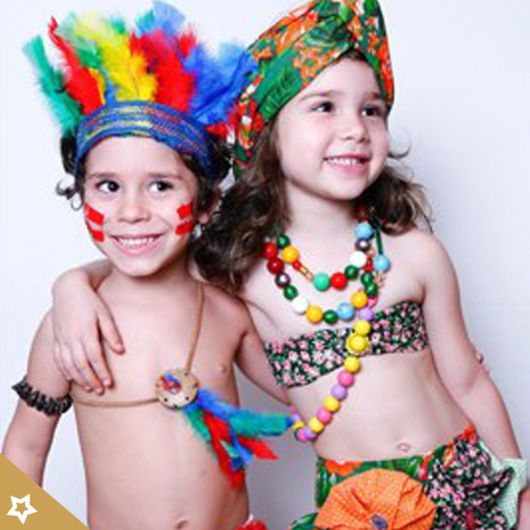 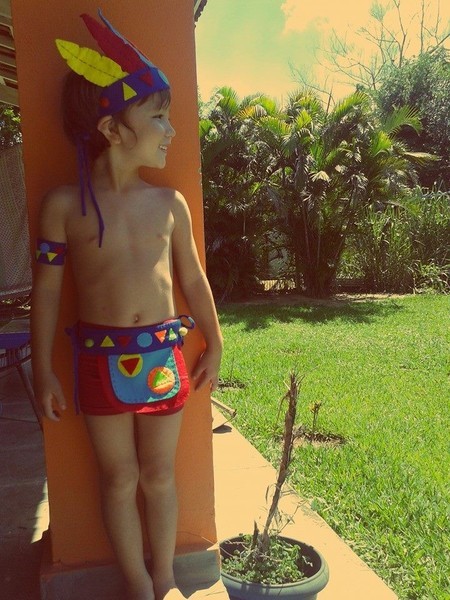 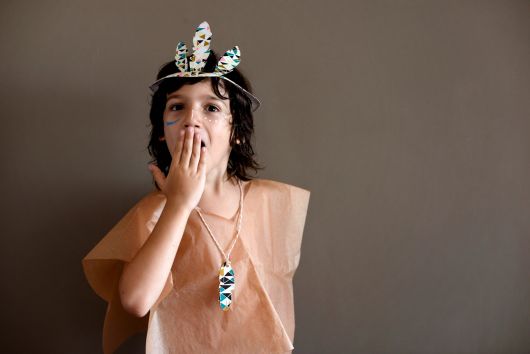 When trying to buy children’s indian costume you will find several models that are not always with the Brazilian Indian way. The stores usually work with the two most common types of clothing: the North American Indians, with longer clothes due to the cold weather, and the Brazilian, very colorful and no more than two pieces. The difference is in the size of the piece. If it’s in the dress style, it’s always North American and if it’s short, it’s Brazilian.

when you think of children’s indian costume one of the most common inspirations is Pocahontas, a Disney animated film character from the 1990s.

Pocahontas is a North American Indian, more specifically from the United States. Therefore, their clothing is different from national Indians mainly due to the climate. The North American Indians’ thick fabrics are mostly leather, a necessity because of the cold climate and living in denser forests. But in several points they look like Brazilian Indians as free movements, use of colors and always natural elements. You can get inspiration from the film to put together the look without problems. 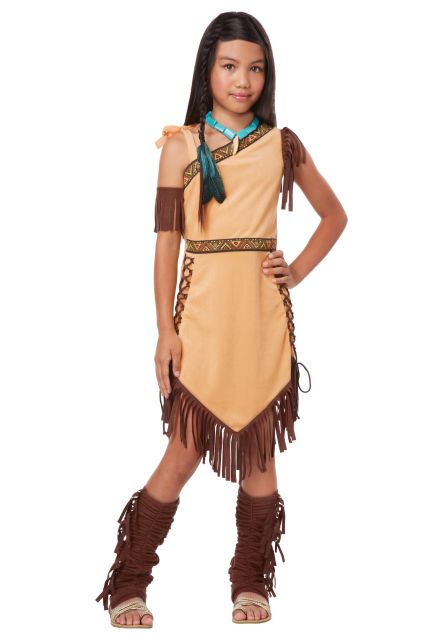 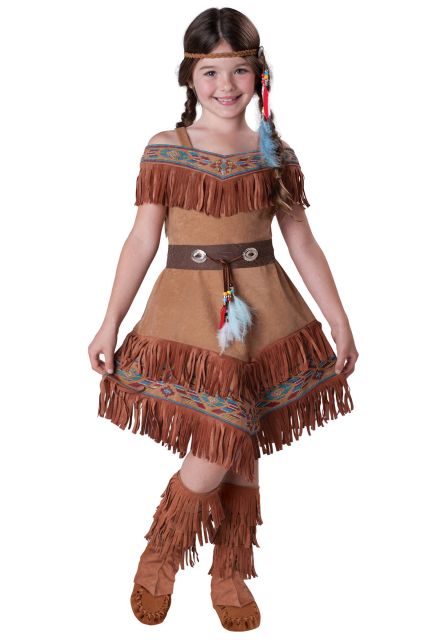 One of the advantages of North American India in costume is being able to wear long, discreet clothing. Not every child likes showing off their legs and for girls this style allows them to wear long dresses with light fabrics.

Another advantage of the unique piece with this model also facilitates sewing for those who are going to do it at home and wear it with children, who are not the quietest. 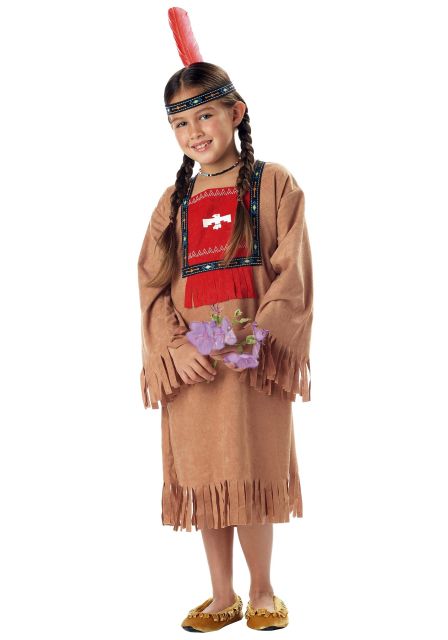 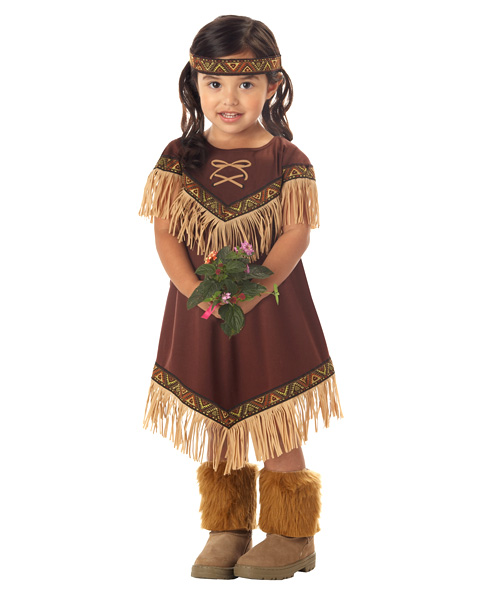 The Brazilian version usually mixes many colors. For girls there are two pieces, a top and a skirt. As the body shows a lot, you need to wear something underneath like shorts. The skirt version is super delicate and very sweet. 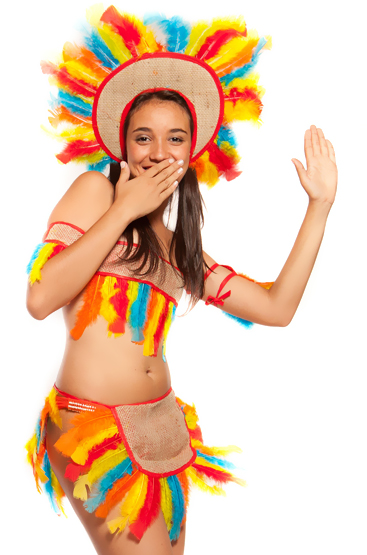 Both boys and girls share the headdress in the shape of a diadem or tiaras, the indigenous headdress. As a rule, the most enhanced and largest headdress models are for the eldest of the tribe and leaders and the smallest for the youngest of the village.

The North American Indian style boys’ models are also in closed colors like brown or beige and can have pants or just a long-sleeved jacket. The short-sleeved version is considered the best for children because it heats up less, facilitates mobility. And we all know that little ones will love playing with the costume and an uncomfortable costume isn’t the best option, is it? 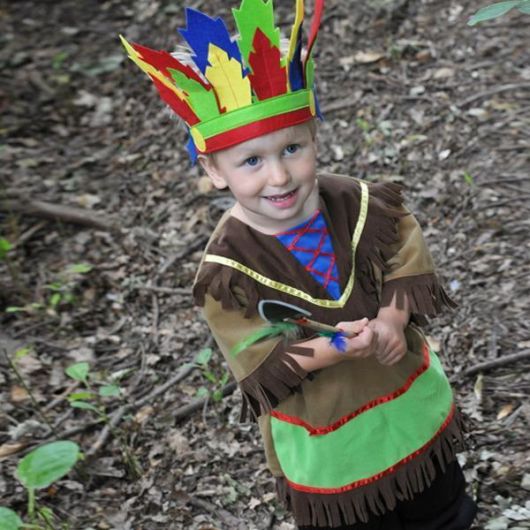 A set of pants and jacket is a great tip to dress children in a simple way with this type of costume. 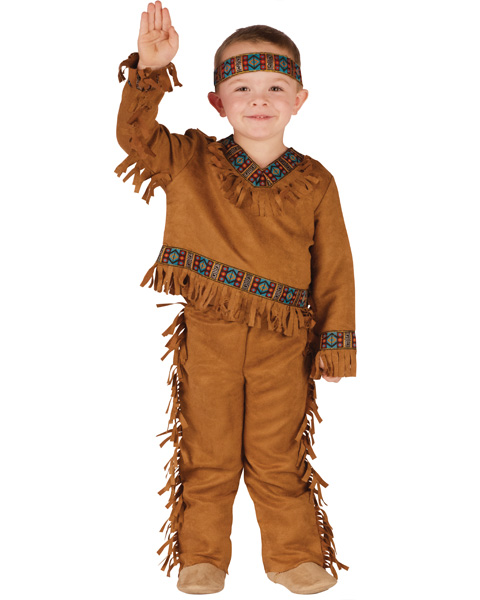 Colorful and vibrant is the children’s indian costume for a boy inspired by the Brazilian Indian Ocean. It has only one piece, a small cloak to cover the region below the waist and can go in swimwear or underwear for children under two years old and a headdress to complement the look. The more colors you use the better! 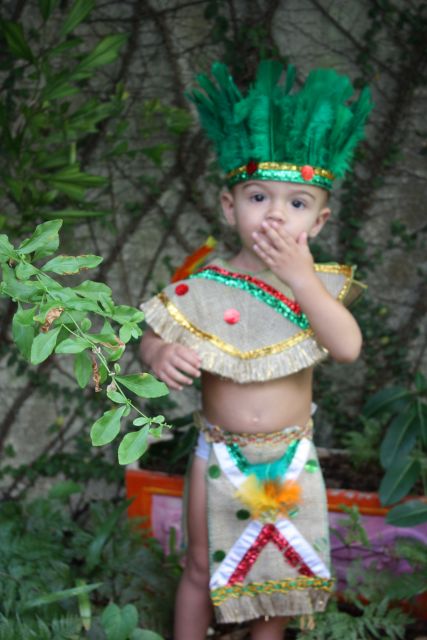 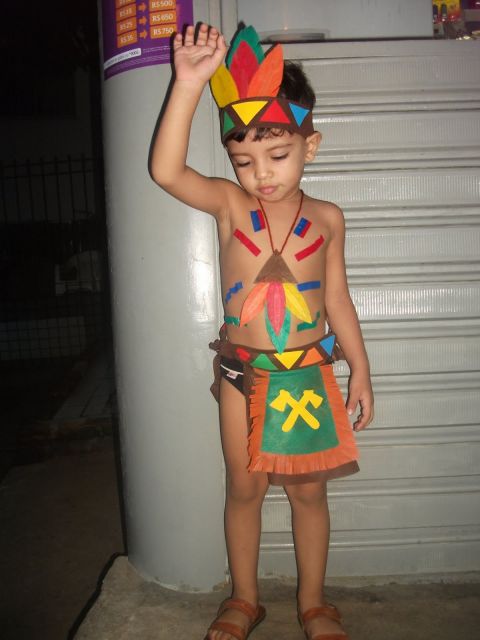 Look how beautiful and colorful the baby version is! 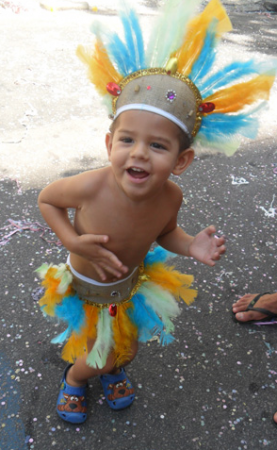 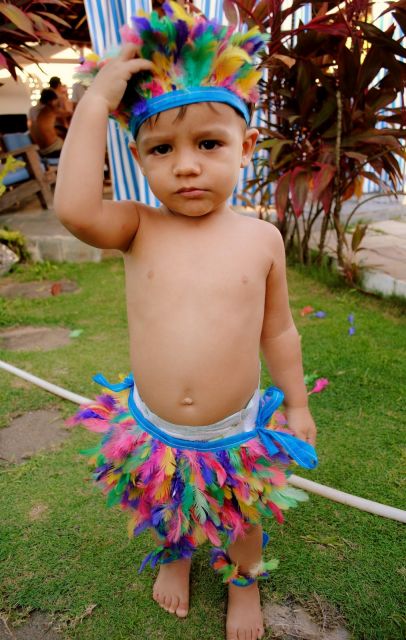 How to Make a Children’s Indian Costume Step by Step

Make a children’s indian costume it’s super simple and very easy. This is actually on the list of the easiest to follow step by step and has the advantage of being cheap too. Little fabric, short dedication time and you’ve already got a beautiful children’s costume. 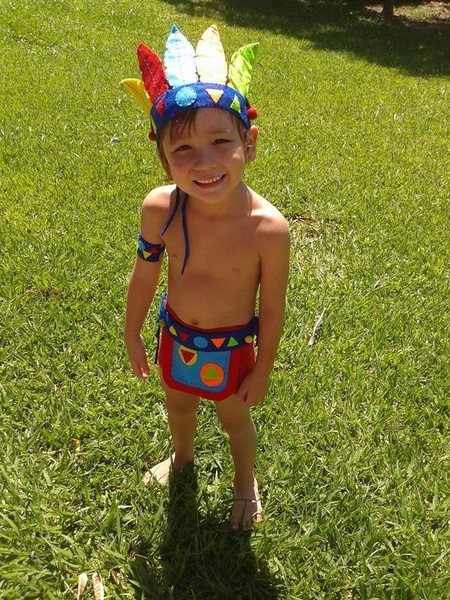 This model does not use any material other than colored fabric. It can be cotton, thick knit or other cheap synthetics. You will use less than a meter of each color to create the short skirt.

To make the skirt, just cut a rectangular square wide enough to go from one side of one thigh to the other. It might just be a rectangle if you’re wearing a pair of shorts or two, one for the front and one for the back. Decorate this part as you like, readable or with some feathers.

The skirt is attached to a belt made of rectangular fabric and receiving the skirt part internally. For the closure we recommend velcro or button as it is simpler to sew at home. Then just create a small band to wrap around the head and create feathers. 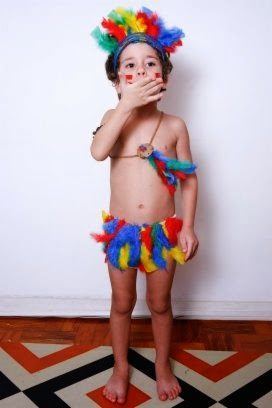 Feathers are preferred by some parents because they are so colorful. They are really fragile, some will fall during the party but that’s no problem because it’s made for just that. Just buy the feathers at stores for handmade products, glue or sew on fabric. It takes a few minutes and is pretty cool. 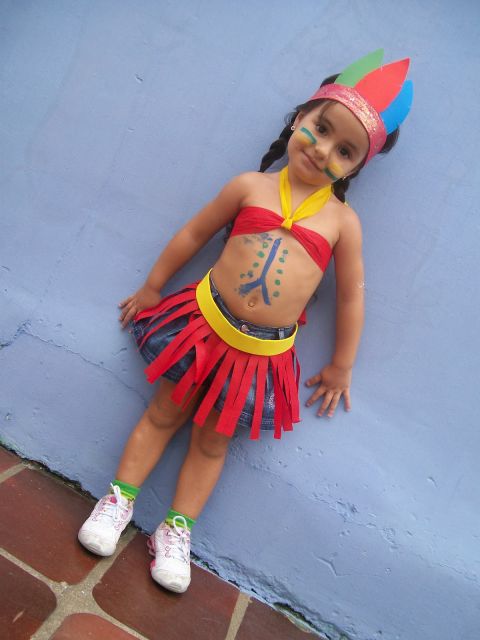 How about a customization for a school party? A nice tip is to use eva (rubberized). Cheap, just cut the most diverse shapes and use hot glue to join the pieces. With less than R$ 10 you can get a beautiful outfit using creativity.

Of course, even the simplest of costumes can get a headdress boost. Feathers are sold at craft stores in many different colors and all you have to do is stick on a fabric ribbon or sew. You can create art with beads and other materials too.

the price of children’s indian costume it is one of the attractions even for those who want to buy ready-made. With less than R$50 you can get a beautiful model in your city or on the Internet.